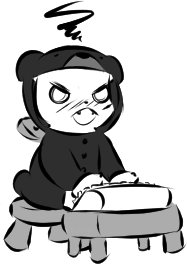 I’m still not entirely sure what to do with this space. Comment entirely on the page? Talk about my own “what-passes-for-a-life,” like webcomic blurbs used to back in MY day? Act as a sort of historical archive for some underpaid graduate student of the future?

I guess let’s just focus on supplementary comic text for now. “Solutions” are the Battlemon world’s counterpart to “potions”; “Battlemon Co.” is its counterpart to “Silph Co.”, which is the large corporation from the first two generations of Pokemon (for the uninitiated). Pokemon is a series of games in which the player controls a child avatar who turns out to be just the best goshdarned Pokemon Trainer there ever was without even really working too hard at it (cont. for the uninitiated).

Rock said “The speech bubble in the last frame looks like a sea urchin hovering over the floor,” and I said, “Hey, up yours, man,” so it was a productive conversations. I give it a 7.8 / 10.