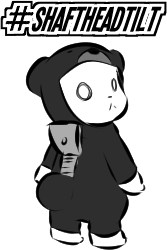 This page updated with the page before it, so make sure you read that one, too!

This shot was inspired by the sorts of soft, wistful drawings that you’d find at the end of a book like Stuart Little, but it’s also a part of the narrative as a whole. Taken together with Racia’s smile from a few pages back, and what she did on the page before this one, I felt it was useful to establish once again that Racia has arrived at something resembling “peace.”

I’m not going to hold anyone’s hand, of course, so rather than say anything about “Battlemon” in retrospect or talk about what I was intending to do with this story, I think I’ll just leave a few questions here. I should point out that, as much as I intended “Battlemon” to read ambiguously, I also had a very clear idea of what I think the “point” of this story was, and that point definitely informed all my artistic choices. Still, I already know what I think about “Battlemon.” I’m far more interested to see what others might have to say about it without my interference. With that out of the way, some questions to leave you with:

How does Racia actually feel about Bunners? What’s the dominant emotion she feels about their relationship? Loyalty? Filial love? Frustration? Sadness, generally? It’d be easy to say “all of these and more,” but in that case, doesn’t “Confusion” work better? Could the two of them, Racia and Bunners, do anything differently (in their relationship, with regards to society at large)? Would they be happier if they did? Is “happiness” what they ought to be prioritizing? Is Racia happy, in those last pages, or just content? Or resigned?

What would you do differently in her shoes?

That’s about all I have to say about “Battlemon” that wouldn’t be interfering, so I’ll leave the rest to you and your thoughts.

“Hey! Racia’s totally brown! What’s up with that! Why is she so white in the rest of the comic? What are you DOING? [Comment you’d expect from whatever side of the political spectrum I happen to fall on, since we all probably have questions about this]!”

^— I’m going to answer this line of questioning for those of you engaging in it right now, but I first want to point out that I find it tiresome and annoying. Racia’s eyebrows aren’t white but that’s how we see them underneath her hair, right? Because it looks striking. The contrast of black and white looks incredibly striking, and I like it, so in greyscale that’s how we’re going to be dealing with most of these characters.

I need to address this, and needed to include a color shot of Racia with her actual skin color, pretty early on in this comic’s run because I remember the hullabaloo that erupted when Andrew Hussie of MS Paint Adventures went on record saying that the main characters of Homestuck weren’t actually “white” the way we understand that but were left intentionally uncolored so you, the viewer, could imagine them whatever color you’d like. I’m not gonna comment on that event or how I feel about it, because I don’t care to do that here. I’m just explaining why I’m trying to get ahead of this issue.

So no, I am not pulling her skin color out of my ass here for whatever points you think I might be trying to win. Racia, and RACIANTAU as a whole, are an extension of an idea I’ve had for years and part of that idea is a setting populated almost exclusively by people of different shades of brown, darker and lighter than Racia is here but generally, mostly, usually brown. It’s my right to tell a story like that, just like it’s your right to be annoyed by it, not read it, yell at me for whatever thing you think I’ve done wrong. I’m not gonna tell you how to react to this. If you want my advice, I’d say don’t think too much about it? It really is not that big of a deal.

Anywho. Thanks again for everyone who’s read all the way up to this point – I know who I am, and I know that I’d be writing and drawing if no one ever read these stories ever, but each of you who have taken the time to read this – whether you loved it or hated it, and even those of you who were ultimately bored of it – mean the world to me. If you like this story, stick around – there are more melancholic Racia stories to come.

Also, if you’re interested in silly stories, we’ve already started publishing Antau’s first story! Today’s the second day of updates. His first story, “Collision 2016,” sees him playing campaign manager for a campaign to elect a Giant Meteor for president in a political system different from but eerily similar to our own. We’ll be updating that comic M-F for the rest of this week and all throughout the next; and then the week after that, we’re coming back to Racia’s side of things for a story called “Cabin Fever”! Follow us on Twitter, bookmark us, add us to your RSS feed; we’re excited to see everyone around!