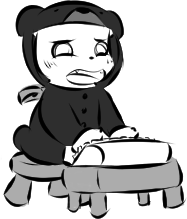 I had one real nagging issue as I approached the end of “Battlemon” production: although I knew who Racia was and so, by extension, understood what she was thinking and feeling throughout the text, I realized that to someone who didn’t know these things it could possibly feel as though Racia wasn’t doing much in the story.

And yeah, that’s not the sort of thing I could go back to “fix” - it’s also not something I’d consider worth “fixing,” because I don’t think it’s “broken.” That’s the sort of story “Battlemon” was intended to be.

That said I’m happy to be following up that story on Racia’s side with this one, because it does a great job of showing who Racia truly is: someone who, on the inside, never stops thinking. It also shows that thought process to be somewhat disjointed, making wild leaps and bounds, with a slightly pessimistic edge and an obsession with facing difficult issues.

Is that a spoiler? I don’t think so, though it could possibly be “telling you how to feel about the character.” I don’t think it’s that, either, though … it’s more just a summary of what should be pretty obvious by this point in the text.

“Cabin Fever” is also much more representative of the Racia stories to come, so this won’t be a one-off sort of thing. Looking forward to that day.

Racia is in trouble when an otherwordly storm interrupts her flight over the freezing tundra. As passengers are tossed this way and that, Racia's thoughts drift from her present predicament to the horrible possibilities the future may hold.