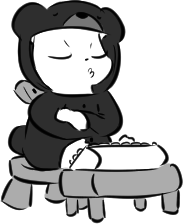 Sometimes during “Collision 2016”’s production I would say, “The story turned out to be pretty timeless.” Then I’d remember strips like this and have to pause and clarify, “So long as the 24-hour news cycle sticks around.”

The American Civil War was plagued by sensationalistic and frankly bad journalism. The Spanish-American War was initiated on fraud. There was always awful shit going on at all times and there never was a golden age.

I’m not necessarily saying that today is “better,” than all those times – not that I think it isn’t better, but that I think looking at the world as having “improved” is usually just a way for people to feel good about themselves and forget all the bad things that are still happening right now. Like … all the bad things. There are a lot of bad things out there, you know? So much so that patting ourselves on the back always feels so hollow and gross.

Wow, that’s some pretty heavy shit up there, right? I guess I say all that to point out that, in the context of that reality, Antau intending to smear a semi-private citizen as a sex predator for his own political gain doesn’t feel beyond the pale. It feels pretty firmly situated within the pale. Not happy about that; it’s just my two cents.