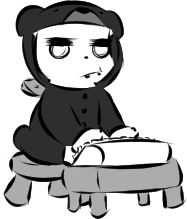 A politician and its campaign organs following through on a promise? Incredible. Actually incredible. Who would take this seriously? What a joke. Luckily this is a gag comic and thus full of jokes. And luckily there’s one more strip to go before the saga of Antau Vacuo and the Giant Meteor is complete.

Building that electromag rail gun was probably a great public works program. But then, what will it be used for after this? I guess the idea might have been that, if this ends up being successful, there’s no real issue with finding another use for it. Ha.

Those titanium plates don’t look necessarily safe or functional, but then Antau doesn’t seem too worried.

This was a fun comic to work on and it was fun watching it get published. As you might guess, we’re publishing another Racia story after this is finished. It’ll start updating next week on Monday (10/31/2016) and run on a MWF update schedule. It’s called “Cabin Fever,” a name I’m quite proud of, and that’s all I’ll say about it for now.

We’ll be back to see Antau pretty soon, though. And next time he won’t be stuck in a newspaper comic strip format. I’m not sure if I’ll ever work in this format again … but it was perfect for “Collision 2016” and, even now, I don’t think I’d change a thing in this comic as it stands.