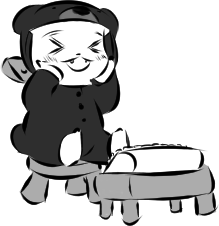 This page was one of the first ideas I had for “Battlemon,” and I’ve always loved how it came out – the angle, the anatomy. The page’s art was actually some of the first I finished while working on this story but I’ve never actually seen the need to come back and make any adjustments. It just works.

I actually had “the idea” for this shot way before I had the idea for “Battlemon,” because the pose is 100% inspired by a shot of Madoka, of Puella Magi Madoka Magica, lying on a plane of water in the opening theme song of the same show, crying and holding a … cat, I think? Whatever. Anyone who’s seen the show will know that little moments like that throughout the opening and the early parts of the show’s run are devastating and heartbreaking once you’ve finished the series and are rewatching it.

So: I knew the shot was emotionally powerful because it consistently succeeded at being emotionally powerful for me, I made the decision to steal the framing for my own work which was trying to evoke similar emotions, and here we are. Take heed, “aspiring artists.” First, stop saying you’re aspiring, you’re already an artist, own it. Second, everyone steals and anyone who tells you otherwise is probably stealing from you. Third, since you’re going to steal, make sure you try doing something different with what you’ve stolen. Otherwise you look like a tool and no one will want to hang out with you*.

*Doesn’t apply if you are already super rich. Won’t apply if you ever become rich. Money solves more problems than it creates. Anyone who tells you otherwise just doesn’t want you trying to get money.