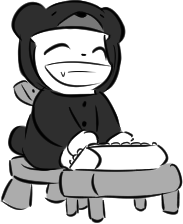 Probably my favorite “Collision 2016” strip. Also probably the hardest to not comment on too directly.

The image in the last panel … I don’t think it’d be used by any real political campaign. I don’t think any graphic designer would be “satisfied” with it; I think it’s a little tough to read the text on the planet. But as a static asset for a comic? For this comic, saying what it intends to say? I think it’s pretty friggin’ perfect.

One thing I’ll say that I hadn’t even noticed when I was making the art for that image: I originally thought of the red “C” around the white circle (which is obviously meant to represent a meteor streaking towards the planet) looked like a glowing red pulsing energy around the rock. I later realized that it could also be the sun, far off in the distance.

I don’t know which interpretation of the image I like more, but I know I love that image.