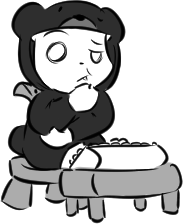 When I first wrote this strip I thought it was a rather important one for understanding who Antau is. If you’re down here, if you read the strip and already laughed, then we can talk shop for realsies, so.

Originally I was planning on starting this blurb by saying “Antau has now actually murdered someone. What a piece of shit.” And it is a pretty awful thing to do, especially when I lay it out like that and make it super clear and stuff. Gross, but the sort of thing we know does happen (although, of course, campaign managers rarely double as “fixers”; using some artistic license here).

Anyway, Antau’s character type is pretty clear in my opinion and it shouldn’t be surprising to hear that he’s inspired in many ways by characters like South Park’s Cartman (who, for the uninitiated, once murdered the parents of a child who was bullying him and fed the ground-up remains to that same child). Transgression is an important part of the archetype, and the violence and uncomfortable reality of the world is the sort of thing I think more people, especially in today’s milquetoast society, need to be confronted with.

All that’s well and good.

But then I thought, what actually makes a rock alive? Sentient? Like, in this world … do they die when they’re eroded? Does it hurt them to have parts of them chipped off? I mean … rocks don’t have nerves, they don’t have brains.

This isn’t me saying Antau didn’t kill a rockstitute although I think the questions introduce enough ambiguity that it’s up to you to decide what actually happened. I’m just pointing out that sometimes the suspension of disbelief can geeet … weird.